“Ek Shaam Mirza Ghalib Ke Naam – An Evening with Mirza Ghalib in Toronto,” a unique event celebrating the works of 18th century Urdu poet and philosopher Mirza Ghalib, was instrumental in bringing the Indian and Pakistani communities together in the city recently.

The event held on Saturday, May 28 featured paintings by renowned artists from the South Asian Diaspora, spoken word, sitar recital and ghazals, all based on the great works of legendary Mirza Ghalib. More than 200 people came together to share, celebrate and pay tribute to one of the greatest writers of the Diaspora – Mirza Ghalib also known as the grandfather of Urdu prose and poetry.

Ghalib was a visionary writer, shunning the entrapments of religion and politics with clever poetic words. “He was far ahead in the game of secularism and while the concepts of multiculturalism and diversity are relatively new to Canada, Ghalib had prescribed these in his writings and philosophy of life more than 200 years ago,” quips Firdaus Ali of iDREAM Entertainment, who helped put the event together. 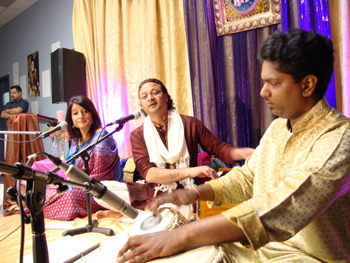 Ghalib, born Mirza Asadullah Baig Khan in 1797 in Agra in undivided India, was a rebel poet and writer, whose verses spoke about undying love. Several titles were bestowed upon him during his lifetime including: Dabir-ul-Mulq and Najm-ud-Daula. However, it was only after his death in 1869, that people recognized his work and realized his true potential. “Deewan-e-Ghalib,” one of his most famous compilations has been translated into several languages including English and Hindi.

While, noted speakers like Shakila Rafiq and Ashfaq Hussain, who won the Pride of Pakistan award recently talked about the relevance of Ghalib in today’s times, reciting his verses which were both original and in-depth – attendees got a taste of Pakistani artist Khuda Bux Abro’s calligraphic paintings which were on display and sale at the event. Abro joined attendees via a Skype interview that evening, stating softly, “Ghalib belongs to India and Pakistan and now Canada, telling us he was truly a global writer and philosopher.” Other Pakistani artists whose works were displayed at the event included: Chughtai, Sadeqain, Jimmy Engineer, and Amin Rehman.

The evening turned magical as sitar player Anwar Khursid of the Sitar School of Toronto recited Ghalib poetry while caressing the strings of his sitar, leaving attendees spellbound. Ghazal lovers got their taste of melodious soulful recitations, when Sanjay Lall of India and Rakshanda Ahmed of Pakistan hummed together to sing Ghalib’s , “hazaaron Khwaishein aisi” and “kisi ko deke dil koi” and other ghazals.

“In short it was a celebration of the soul,” says Ali. “Truly, have you seen a better sangam (union) of India and Pakistan in recent times? More such events are needed for our communities to own and embrace their cultures and showcase it to the rest of the world.”

This event was proudly sponsored by MyBindi.com.