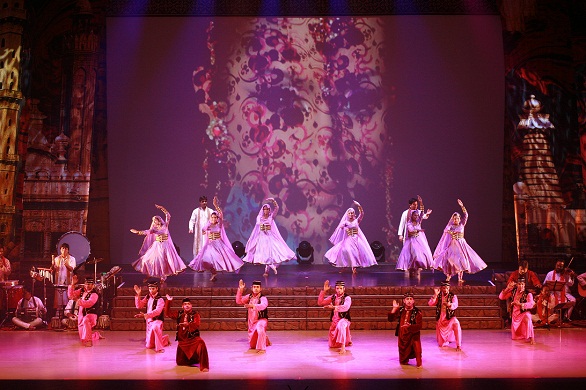 The cast of BHARATI is comprised of dancers, actors, singers, acrobats and musicians in a powerful tale of love and homecoming. BHARATI tells the story of Siddharth, an Indian-born engineer raised in the United States who returns to his homeland to work on the Ganga Cleaning Project. Cynical and contemptuous of all things Indian, Siddharth finds himself attracted to a mysterious Indian woman named Bharati. As she re-introduces him to the wonders of India, Siddharth ends up discovering his true self, and the meaning of love.

BHARATI features original background music and 19 of the greatest hit songs of Indian cinema, all played and sung live. Each musical scene represents a regional Indian tradition and through the choice of rhythms, instruments, vocal arrangements, melodies, choreography, costumes, and video images a unique cultural portrait is created.

SONY CENTRE FOR THE PERFORMING ARTS, Toronto’s first performing arts centre, has played a defining role in the cultural life of Toronto for more than 50 years. Today, the newly renovated Sony Centre’s mission is to unite the global citizens of Toronto through great artistic experiences. In addition, the Sony Centre is dedicated to developing Toronto’s younger audiences through family programming; workshops targeted towards school-aged audiences, an under-30 membership program, and other community initiatives.

This event is proudly sponsored by MyBindi.com.

Catch a Sneak Peek of Bharati below!