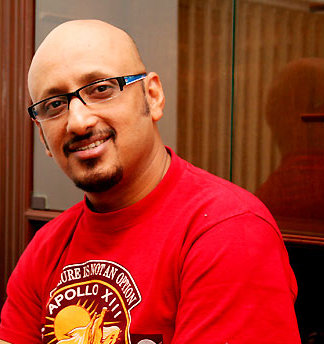 The 'Inkaar' soundtrack is composed
by Shantanu Moitra

The chemistry between Arjun Rampal and Chitrangada Singh has already upped the ante for upcoming film “Inkaar”, which sees Sudhir Mishra uniting with his muse yet again. Musically speaking, the album has only five tracks composed by Shantanu Moitra, with lyrics by Swanand Kirkire.

The soundtrack kicks off with “Darmiyaan“, which begins as a rock track with guitar riffs. However, it takes an interesting turn as the vocals are introduced in the song. Swanand Kirkire provides both – the feel of a rock ballad and a typical Bollywood romantic number, with his voice. Co-existence of elements like Sufi and qawwali also does the trick, keeping the listener hooked to the song.

Next up is “Maula tu malik hai“, where the mantle is carried forward by the lyricist and the composer as they have teamed up behind the mike. Their voices combine quite well and after hearing the number a few times, it manages to click. Laced with the sound of saxophone, the song is worth a hear!

“Zindagi ka karobar” is the clear winner in the album. Crooned by K. Mohan from rock band Agnee, it has a great blend of elements of Indian classical and rock, making this one pure ecstasy to the ears. The voice has so many layers and such versatility that the listener is just mesmerised to the core. A big thumbs up to the composer as well, for bringing out Mohan's voice so well. This one is a class apart.

It is followed by “Kuch bhi ho sakta hai“, a purely rock number, which might click with Hindi rock lovers. It is packed with some good guitar riffs here and there, but it fails to carry forward the flame of glory of its predecessor. The vocals by Suraj Jagan are powerful and in sync with the composition, but it could still have done with better treatment.

Last of the lot is the film's title song. It is an instrumental track which has the sound of violin trying to charm your ear buds. The music is backed by Monali Thakur's seductive voice, which mixes well with the sound. However, it plays more of a complementary role. A soothing song for the senses. Give it a shot!

Overall, there is not too much on offer in the soundtrack of “Inkaar“, and there is a definite dominance of the rock genre. This could restrict its base. However, the tracks are really enjoyable and except for a few shortcomings, it is a fine album. So if you are a rock or an alternative lover, take this album home and enjoy to the fullest.