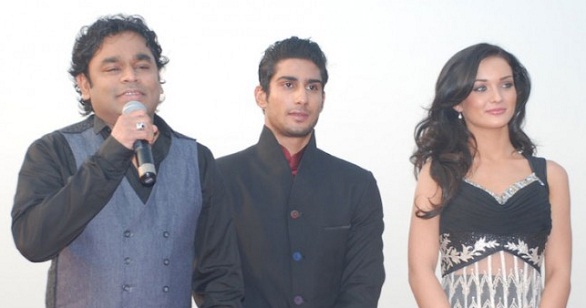 A.R. Rahman is caught up in a controversy following objections from a Christian group over the use of the word “Hosanna” in a song from “Ekk Deewana Tha”. The Oscar-winning music composer says he didn't intend to hurt anyone's sentiments.

According to reports, Joseph Dias, general secretary of Mumbai-based Christian Secular Forum (CSF), has raised objections on the use of the word “Hosanna” in the song, claiming that the word is a sacred term used in prayers by Christians and Jews.

But Rahman feels there's nothing wrong with its usage.

“As with any film project I work on, I had spent several months researching before composing and writing all the songs for 'Ekk Dewaana Tha' and had consulted friends who are Christian in particular about the use of the word 'Hosanna' in this song,” Rahman said in a statement.

The Tamil version of “Hosanna” had featured in “Vinnaithandi Varuvaayaa”, which released in 2010.

“The song was a sensation when it was released in the south. It went on to win all possible music awards and was well received by all communities! Therefore I am deeply concerned about the sentiments of all those who appear to be hurt by this song,” he added.

Lyricist Javed Akhtar also finds nothing wrong with the song.

“When we write lyrics with great composers such as Rahman, who is one of the most respectable human beings I have had the pleasure of working with, the intention is never to insult any religion, why would we,” Akhtar asked.

A spokesperson for Fox Star Studios says a written reply was sent to Dias Friday.

“Our organisation, our music partners Sony Music Entertainment, our producers and all of us are responsible organisations and our view is that more often than not creativity, freedom of speech and expression in art form are stifled by some people who have their own agendas. We have replied to Mr. Jospeh Dias today by letter,” the spokesperson said.

The film, directed by Gautham Menon, will hit the screens Feb 17. It stars Prateik and Amy Jackson.

Listen to a preview of A.R. Rahman's “Hosanna”. Do you think it's controversial?