The Textile Museum of Canada presents Portable Mosques: The Sacred Space of the Prayer Rug. Curated by Natalia Nekrassova, this exhibition explores the prayer rug as an important element of worship within the Islamic world. 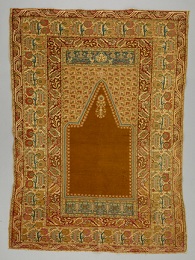 Portable Mosques: The Sacred Space of the Prayer Rug draws on the TMC’s significant collection of carpets and rugs. Thirty characteristic examples of prayer rugs created during the early 19th and early 20th centuries from across Afghanistan, Azerbaijan, India, Iran and Turkey are featured. These highly valued textiles integrate local aesthetics and materials and are a powerful expression of worldview.

As part of daily life within Muslim cultures, the prayer rug is used several times a day, offering a clean and sanctified space in both material and representational form. Each has intricate and powerful symbolic meaning, enacting a transcendent space isolated from the profane world in which to concentrate in prayer.

Connecting the individual to the sacred, the prayer rug’s design embodies architectural details – niches and arches that represent directional points to orient the worshipper towards Mecca. Through this symbolism, the prayer rug functions in effect as a portable mosque, fusing personal with collective experiences as well as physical and sacred spaces.

Portable Mosques: The Sacred Space of the Prayer Rug is the Museum’s latest collection based exhibition. The TMC’s permanent collection boasts over 12 000 artifacts from 200 world regions and spans almost 2000 years.

The Museum offers a broad variety of exhibitions based on its collection, bringing artifacts and art practices to the public in engaging and interdisciplinary ways that connect art and design, tradition and innovation.

This event is proudly supported by MyBindi.com.