Fenulla Jiwani, a multi-faceted and multi-talented artist, had the distinguished honour of receiving the 2014 Cayle Chernin Award at an event held on May 22nd. In a
ddition, Fenulla was presented with $1000 of equipment rental in support of her next film project.

“This story powerfully came through me and unfolded spontaneously on the page. I knew then that it had to be told since many people could relate to Mahima’s experience of questioning life and having an urge to know the true Self.”

Fenulla is well known for her stage productions 30 Dates and Paul & Priya’s Wedding as well as for her music album Divinity We Are One. The Toronto Arts community is embracing her transition over to film with her first short entitled, NOBODY. 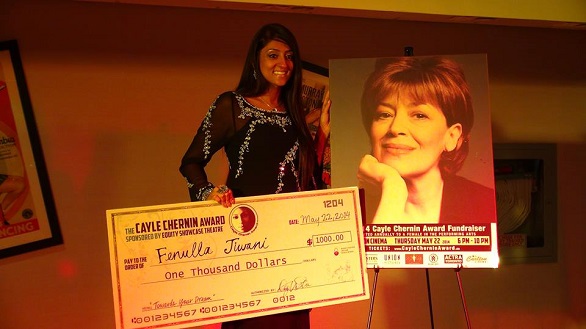 NOBODY, shot in 4K Ultra HD, tells the story of how a spontaneous event turns Mahima’s (Fenulla Jiwani) world around and everything she thought about who she is and what her future will be like is challenged. On route to her engagement party with her parents (Sugith Varughese & Mishu Vellani) and sister (Meher Pavri), she looks out the car window and locks eyes with the saintly Theresa (Jani Lauzon), a homeless woman. From that moment onwards, Mahima’s inner life changes. As the eldest daughter in a Muslim family, Mahima has always felt responsible for living up to her parents expectations and has succumbed to both societal and cultural conditioning. Although she has a good career, is engaged to Asad (Saad Siddiqui), the love of her life and desires to settle down and start a family, she feels unhappy, like something is missing in her life. Mahima questions: is life just about being a somebody?

Fenulla is inviting the community to be part of this heart warming film through an Indiegogo campaign (running until May 30th 2014).

Offering a unique opportunity for people to get involved and support the project. NOBODY will be submitted to TIFF and various film festivals around the world.

FenStar Productions is a strong believer in paying it forward; the NOBODY film campaign will support Ramana’s Garden, a loving home for 60 children and a school for over 160 students in Rishikesh, India. 10% of all money raised from the campaign will be donated to Ramana’s Garden.

FenStar Productions was launched by Fenulla in 2005 with the mandate to express the South Asian diaspora, cast ethnically diverse performers and use a variety of multidisciplinary mediums. After eight years of dedication to theatre with six plays under it’s name including two touring productions, it's now transitioning into writing and producing screenplays starting with the short film NOBODY. Another short film, entitled BLACKBOX SHADOW, is also in post-production. Both films have teamed up with the incredibly talented Director Jonathan Dubsky (Mars is Laughing at us – Official Selection of Reel World 2014 & All for Davey – Best Ensemble at 48h film project Toronto).