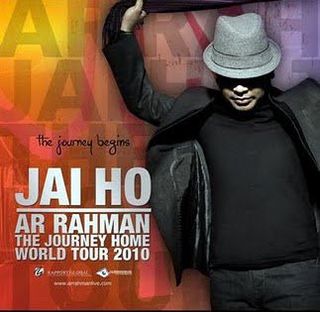 The “A.R. Rahman Jai Ho Concert: The Journey Home World Tour” produced by Deepak Gattani and Rapport Productions, will kick off on June 11 in New York at The Nassau Coliseum. Rahman is set to collaborate with creative director Amy Tinkham who is known for creating live musical concerts for a variety of pop-music icons including Madonna, Paul McCartney and Mariah Carey. Accompanying Rahman will be renowned Indian performers Hariharan, Javed Ali, and Naveen Kumar. He also be performing along side some of pop music’s most notable musicians including Taku Hirano (Lionel Richie, Fleetwood Mac), and John Beasley (Barbara Streisand, James Brown and Miles Davis).The show will be a unique and thrilling theatrical experience and is confirmed to travel to over 20 major arenas and cities worldwide including The Forum in Los Angeles, The Patriot Center in Washington DC, American Airlines Arena in Dallas as well as Wembley Arena and O2 in London to name a few (routing listed below).

The material spans throughout AR's prolific career, including songs from Slumdog Millionaire as well as landmark Indian films Lagaan, Jaane Tu Ya Jaane Na, Dil Se, Rang De Basanti and Roja'. Roja' was a run-away success and brought nationwide fame and acclaim to the Rahman. TIME Magazine rated the soundtrack of 'Roja' in the Top 10 of their all time best movie soundtracks of the world; the movie also won Rahman the Indian National Award for the best music composer, the first time ever by a debutant. Since then, Rahman has gone on to win the National Award 3 more times, the most ever by any music composer.

Rahman's rise to prominence in the west came when he captured the world spotlight last year with his work on the film score for Danny Boyle's Slumdog Millionaire winning a Golden Globe, two Academy Awards and most recently two Grammy's. As a touring musician, as well as composer, Rahman has long been filling arenas with his elaborate and stunning live performances. Rahman has sold-out international arenas including the prestigious Hollywood Bowl in 2006 and has played for crowds as large as 120,000 in his home country of India. Now, this summer, audiences have a rare opportunity to experience a must-see concert event with “A.R. Rahman Jai Ho Concert: The Journey Home World Tour.

Rahman has had several high profile placements and appearances in the last year. He was featured in “The TIME 100: The World’s Most Influential People” as well as Fast Company’s “100 Most Creative People in Business.”  He appeared on The Oprah Winfrey Show and The Tonight Show with Jay Leno.  Last November, Rahman was invited to perform at The White House for the first state visit for Prime Minister Singh, hosted by President Barack Obama.  Rahman was also featured in the re-make of “We Are The World” alongside Wyclef Jean, Jennifer Hudson, Barbara Streisand and Celine Dion to name a few.  Tickets on-sale now. For information on purchasing tickets visit  www.arrahman.com and www.arrahmanlive.com. Additional dates will be announced soon.

The much-anticipated AR Rahman tour went off without a hitch in New York, New Jersey and Chicago, but the Detroit show saw an unforeseeable accident during the set up hours. While this accident was significant, all technical crew who were on duty at that time are safe. AR Rahman announced that he was very happy to know that his crew was safe and he attributed that to the grace of the Almighty. In light of this accident, AR Rahman and his team have rescheduled the tour dates to ensure that they deliver the best they can during these performances while ensuring that the 'family' of technical staff who have been working with them are able to perform their duties. These technicians are the best in their field and their work cannot be replaced.

The new show date for Toronto is Sunday, September 26. All fans are being assured by Rapport Productions and the local promoters, Altaf Hussain and NK Production Consultants and Mega Concert Promotions, that all tickets bought to date will be honoured.