Gurpreet Singh Sarin, is best known for his bright turbans and soulful vocals on reality-singing competition, 'American Idol'. Now dubbed as the “Turbanator“, Sarin has broken cultural barriers by becoming the first ever Sikh to make it to such a program, and become a Top 40 contestant.

Take a look at Sarin's cover of JT's Cry Me A River:

MyBindi's Habiba Ahmad caught up with the talented Sarin to discuss life after 'Idol' and why he is so passionate about singing, song-writing and playing the guitar.

You have made pop culture history by becoming the first ever Sikh to make it to American Idol and reach to the Top 40. How do you think you have impacted society? 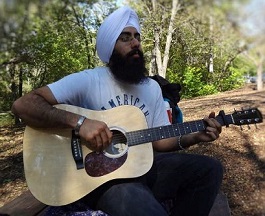 One thing I love about music is that it is universal – it shouldn't matter how you look, where you’re from, what language you speak, etc. Auditioning for American Idol was a goal of mine because I wanted to take my passion for singing and music to the next level.

I’m glad to have had the opportunity to show the world that you shouldn't judge a book by its cover.

I've been told that I have now opened the doors to minorities and given them the courage to pursue their passion without thinking of their appearances as obstacles – that is a huge blessing for me!

There were some negative comments said about you in social media such as “Osama bin Laden cannot win American Idol #ThatsUnamerican”. How did you overcome such adversities?

I was aware that my unique identity would possible result in racial slurs; however, my main focus was on getting to the next rounds of the competition, so I wasn't spending any time with the hate messages.

Many Sikhs have been subject to hate, especially since the attacks on 9/11 – by keeping my head up and staying confident, I wanted to prove to society that you can stand up to bigotry and conquer your fears with a positive attitude. I’m thankful for all the support and encouragement I received from my family, friends, local community, and the entire Sikh community.

On the other hand, you were also seen as a rallying point for the Sikh-American community. How did you feel knowing you were representing an entire ethnicity?

It was such a blessing and honor to be able to represent the Sikh-American community and Sikh religion on the mainstream network! Having such a strong support system to provide me with words of encouragement, I felt confident being an ambassador for Sikhs.

I believe there are many ways to educate others about who we are; our religion, culture, beliefs, etc. Being on mainstream media was an approach that I found to be lucrative because of its large audience-base. It was very re-assuring when naysayers approached me and said “you have changed our perception and helped educate us”. Hearing those words already assured that I had succeeded!

You only started practicing Western music a couple years ago. What brought you to shift from your background of classical music? 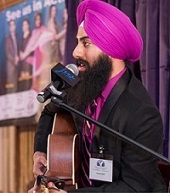 I've mentioned before that I believe music in universal – music of the east and west has been combined by many artists, such as Ustad Zakir Hussain, Pandit Ravi Shankar, Norah Jones, etc.

My passion for Western music, particularly blues, jazz, soul, and folk came about when I noticed that they all share a common link with Eastern music: improvisation.

Indian classical music roots itself of the notion of improvising and expressing emotions from the heart. I found this concept to exist in particular genres of Western music, and that’s what got me to start practicing.

After being eliminated from ‘American Idol’ you promised your fans that you would return next year. Have you considered running for a competition other than ‘American Idol’ such as ‘The Voice’ where they solely base one’s performance on vocals and not appearance.

I auditioned for ‘American Idol’, because I had been watching the show for a few years and was aware that many of its finalists had achieved stardom and recognition in the music industry. That being said, I’m open to all venues and have not ruled out other competitions. I have considered competing on 'The Voice’, because they do indeed focus on vocals and not so much of appearance.

Being Sikh didn't stop you from achieving your goals in the Western world; instead it has worked as your fuel. What advice do you give those breaking cultural barriers? 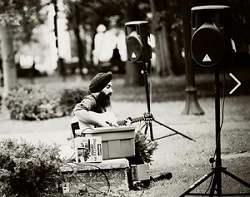 I believe it’s important for us to recognize that our unique identity should not act as an obstacle and should not prevent us from following our passions and goals. More than anything else, sometimes our mind acts as a hindrance, because we feel that we won’t be accept.

I like to reiterate a quote from Canadian Hockey Player, Wayne Gretzky: “You miss 100% of the shots you don’t take.” I encourage everyone to step out of their comfort zone and stay optimistic!

What do you think of Canada and your fans in Canada?

I've been to Canada a couple times and one thing that always pleases me is the excellent preservation of the Sikh religion and Punjabi culture. Whether it’s the participation in Gatka after a Sunday Divaan, Bhangra practice, or a simple afternoon stroll by a Sardar Ji in a flowing beard, beautiful Dastar, and Kura Pajama – these things draw me close to Canada!

I want to thank each and every one of my fans in Canada for reaching out to me and providing me with support! It truly means a lot to have such a wonderful fan-base and I’m excited to meet everyone!

What do you do when you’re not enjoying your love of music and song?

Outside of singing and music, I enjoy spending time with family and friends, playing tennis and working out, reading, watching TV shows, shopping.