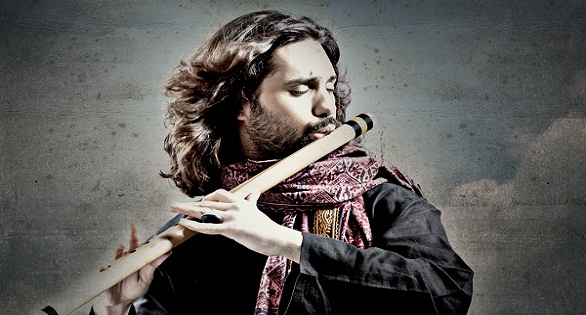 Ben Tzur is a composer, producer and performer who hails originally from Israel, but his music differs greatly from standard Israeli composition. After attending a concert given by the Indian classical musicians Hari Prasad Chaurasia and Zakir Hussain, Ben Tzur became enamored of that style, and he spent a decade living and creating in India. After spending many years studying classical Indian music, he felt compelled to compose music in that tradition using his own language. Running these two distinctive cultural influences in tandem, Ben Tzur has managed to generate his own unique sound, harmoniously blending Israeli and Indian musical flavours to create a new and exciting strain of music that defies categorization.

Working with traditional Sufi Qawwali singers – Qawwali is a form of ecstatic Muslim devotional music – as well as a variety of different folk musicians from the Rajasthan desert, Ben Tzur has fashioned his own Qawwali music which is sung in Hebrew, along with several other unique compositions and some Hebrew poetry. Since the release of his first album (titled “Heeyam”) in 2003, Ben Tzur has never stopped expanding his musical horizons, and he has continued to develop his incredible fusion of Hebrew and Middle Eastern musical influences with those of the Indian sub-continent. The resulting product is a powerful 8-piece multicultural ensemble of highly talented Israeli and Indian musicians who deliver an awe-inspiring show that resonates with audiences of all ages, and from all walks of life.

Check out this interview with Ben Tzur HERE in which he discusses religion, politics, his musical influences and the evolution of his sound.

Ben Tzur released his acclaimed second album “Shoshan” (produced by EarthSync) in 2009, and he has toured extensively in India, Israel, Europe and the Far East, but has yet to perform in North America. On Sept. 2nd, he will be making his North American debut at the Ashkenaz Festival
with a FREE performance at the Harbourfront Centre on the Westjet Stage at 8 PM. Needless to say, this is a very exciting event, but if you can’t make it to the festival, fear not.

Ben Tzur will be putting on a follow up performance at the Tryst Nightclub at 7:30 PM on Sept. 6th. This concert is part of the BINDAAS (Bindaas is Indian slang for “it’s all good”, equivalent to the Hebrew word “Sababa”) event, which will be a joyful celebration of Israeli and Indian culture, presented by the Centre for Israel and Jewish Affairs’ Size Doesn’t Matter
project and featuring the Rajasthani Gypsies alongside Ben Tzur. The evening will be one to remember, so come on down and prepare to immerse yourself in the sights and sounds synthesized by the melodious marriage of two of the most alluring cultural meccas in the world!