Padmashree Pandits Ramakant and Umakant Gundecha, the celebrated Dhrupad Vocalists were in Toronto presenting the concert on May 10, accompanied by Shri Akhilesh Gundecha on Pakhawaj and Netra Unni and Swathi Swaminathan on Tanpura. 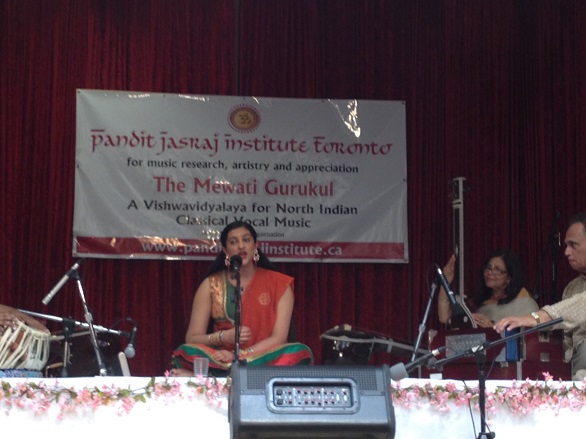 The Dagarvani dhrupad singers who always sing together, were initiated into music by their parents at a very early age studying at the local Madhav Music College after which they trained under dhrupad masters, Zia Fariddudin Dagar and his brother Zia Mohiuddin Dagar. Over the years, they have worked to expand the dhrupad repertoire by incorporating texts by Tulsidas and Nirala and have founded a Dhrupad Institute outside Bhopal where students from across the world learn in the guru-shishya style.

The 200 plus audience of classical Hindustani music gave the illustrious vocalists a standing ovation at the end of the concert, clapping for more music and persuading them to perform a short khayal in Raag Bahaar.

The event, emceed by Renu Mehta, began with Netra Unni, a young student of Dr. Arya at PJIM Toronto.

“Umakant Gundecha and Ramakant Gundecha, known as the Gundecha Brothers, are legendary Dagarvani dhrupad singers,” said Dr. Amit Arya, founder and director of Pandit Jasraj Institute of Music in Toronto (PJIM) that organized the concert. “They have received the fourth highest civilian award in India – the Padmashree in 2012 in the field of Art – Indian Classical Music – Vocal – Madhya Pradesh.”

The programme also featured Dr. Arya who was accompanied by Kiran Morarji on Tabla and Raya Bidaye on Harmonium.

“Amit Arya is a very sensitive and remarkable young Indian classical singer. It is remarkable that he was born in Canada, and yet is able to sing and perform at such a high level.”

“I am blessed to be able to perform Raag Multani, a late afternoon Raag at the same concert as my Guru – Dr. Amit Arya and the Gundecha Brothers,“ said the 16 year old student who has been learning Hindustani vocal music from Dr. Arya for the past two years. “I want to keep learning in the guru shishya parampara and in five years I want to be able to know several Raags in depth and improvise on my own.”

“We wish Amit Arya all the success for his musical life and would recommend him as an extremely talented upcoming musician of the younger generation,” said the Gundecha Brothers.

Launched in 2011, the Pandit Jasraj Institute of Music in Toronto has a mandate to propagate Indian Classical Vocal Music and through this Institute, students of all ages and levels carry on the legacy of the Mewati Gharana, along with the rich cultural traditions and values of India. The Institute offers classes in Hindustani classical music for students who wish to learn in the traditional Guru Shishya Parampara in the Mewati tradition.