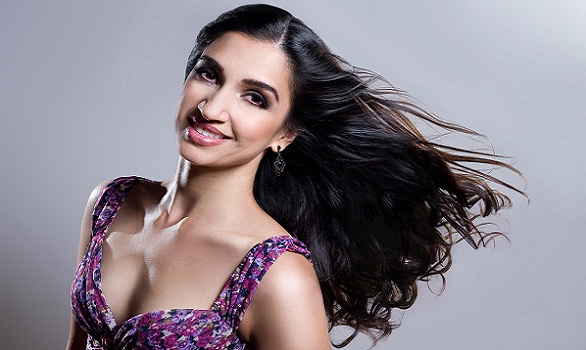 Bageshree Vaze started singing and dancing at a young age with the goal to achieve her father and grandfather’s dream – to be a professional singer. After years later and countless efforts, Bageshree has released three albums and is all set to release her fourth, ‘Ragas and Rhythms, Global Bollywood', in concert on August 23rd in Toronto. With dedication and determination, she’s quickly bounced back into the professional world after have given birth to her son Vihaan just four months ago. But her fans did not expect any less from her as she’s juggled careers and family life for over a decade.

Last year, Toronto had the pleasure of witnessing Bageshree perform live in Avatar (9) – an exceptional kathak performance. In addition to dancing, Bageshree also tackles choreographing, composing, and writing. So what’s the secret to her “madness”? MyBindi.com’s Ashna Singh gets the scoop from the source herself in an exclusive interview.

“Even though I chose a very esoteric path in pursuing Indian classical music and dance in Canada, dance and music have actually chosen me, rather than the other way around.” – Bageshree Vaze

Q. Many Torontonians know you as a phenomenal kathak dancer and choreographer. But, you are also trained in Indian classical vocal music. Describe the moment when you knew you wanted to pursue a career in singing.

Growing up in St. John’s, Newfoundland, I always knew I wanted to sing and dance, but as a teenager, I never envisioned doing it professionally, and that was simply because there were no role models of Indo-Canadians who had made a career of it. When I was in my early teens, I started learning Indian classical singing from my father, who had learned from his father, and I also sang in the school choir. It was a ‘hobby,’ but whenever I thought of what career I would pursue, I couldn’t fathom the idea of music not being a large part of my daily routine.

Even though I chose a very esoteric path in pursuing Indian classical music and dance in Canada, dance and music have actually chosen me, rather than the other way around. Every time I question singing as a career path – especially singing a non-mainstream style — something comes along to make me realize it was something I was born to do. Canada is a great country and because of Pierre Trudeau’s vision of multiculturalism, I have been able to find government support for my endeavours, especially in producing CDs. It was my grandfather’s and father’s dream to be a singer, and in a way I feel they are singing through me.

Q. How did you manage to preserve your Indian heritage and culture growing up in Newfoundland – a province that has a low South Asian population compared to Ontario?

Because of the low number of South Asians, that made it easier, and a blessing – Indians of all backgrounds, North and South, came together, and because of the isolation they felt, had a stronger desire to teach their children about their heritage. The local Indian community set up a temple, and I went to Sunday school (in Chinmaya Mission style) and learned Hindu philosophy and bhajans. Through a federal government grant, the temple sponsored an Indian dance teacher to come and teach for two weeks in the year, and that was my introduction to Indian dance. It’s commendable the temple and its activities in St. John’s continue to this day.

Q. How do you prepare yourself before a live performance?

Performance is simply practice, but it is an enlightening experience, and pushes you to another level of understanding and capability. Sometimes the simplest things are the things you make mistakes with, and the things you didn’t think you could do, magically come alive on stage. Performing in front of even one other person can be a challenge, but it’s important to remember that performance is sharing your art, rather than trying to be a ‘diva’ or superstar. Warming up before going on stage is very important, but ultimately it is the hours of practice that will determine what happens on stage. The rest I leave up to destiny.

Q. On August 23rd 2012, you will grace Hugh’s Room in Toronto for the Global Bollywood CD Release Concert. What can fans expect from your new album “Ragas and Rhythms”?

The album is called ‘Ragas and Rhythms,’ and features songs that try to capture the character or mood of a raga (a set of notes or a scale in Indian classical music). For example, in ‘Jaya Shankara,’ I try to show the austerity of the raga Ahir Bhairav, which is associated with Lord Shiva. Karsh Kale has done a great job in re-interpreting this with electronic soundscapes, and the production on the rest of the songs also tries to augment the characters behind each raga.

‘Global Bollywood’ is a separate segment of the show that features the world influences of the best music directors in Hindi film history – C. Ramachandran, Shankar Jaikishan, R.D. Burman, Bappi Lahiri, Biddu, A. Rahman and Shankar Ehsaan Loy. I have chosen a set of songs that show how these music directors were influenced by other styles/elements of music, such as Latin percussion, Eastern music, reggae, disco and Celtic music. It’s really an exciting display of the genius of Indian film music and how the world was reflected in these songs, while still maintaining the ‘Indian ‘sound. Some of the finest musicians in Canada are performing in this segment: Chris Gartner (Bass), Jaron Freeman Fox (Violin), Kevin Laliberte (guitar), Bill Brennan (piano), Sundar Viswanathan (saxophone), Vineet Vyas (tabla) and Varun Vyas on drums (Vineet’s older brother).

What’s really exciting about this project is that people of my generation and even earlier will appreciate songs we grew up with, and the films associated with them. I used to watch movies like Namak Halaal
and feel a sense of connection with India, but now that I’m older, I can appreciate even more the music and ideas behind such films – the ‘Global Bollywood’ segment celebrates this, and is really a fun show while still being musically challenging. It captures an era in which music was created with a global mindset, before the tools of the Internet and even television were so rampant in India, and shows how India has always been able to take the best of other cultures and make them part of its own.

Q. On several occasions, you have collaborated with your husband and tabla artist Vineet Vyas. What is it like working with your spouse side-by-side?

We met because of what we do, and I can’t imagine life without a partner who is completely in sync with me on both a personal and artistic level. He is a master musician, and I learn something from him everyday. It is a joy to rehearse and perform with him, even though many of the time we may be a little sleep-deprived because of our two small children! Kalashree is five-years-old and Vihaan is four-months-old.

Q. The amount of crafts you carry under your belt – singing, dancing, choreographing, writing, and composing – is incredible. Which do you prefer and why?

They all go hand in hand! But when it comes to dance, Kathak dance is my favourite style – I think it is the most evolved style in the world. I began learning Bharatha Natyam, and later learned Kuchipudi, West African, jazz, contemporary and hip-hop, and while each style has its own beauty, Kathak dance is my favorite, and the most challenging, because the dancer must completely master the music and rhythm of the style, not just the bodywork. And it is the most dynamic!

Q. How do you manage your time while bouncing between industries, family, social obligations etc.?

With two small children, it is very difficult, but my secret is my mother, who lives around the corner from me. She babysits when I have rehearsals, and makes sure we have a decent meal to eat. I couldn’t survive without her! And while I love performing and creating work, children are the most rewarding thing in the world. I just love my daughter and son, and I love spending time with them.

Q. What goals do you have for yourself with respects to your singing career? Where do you see yourself in 10 years?

I continue to push myself to new places as both a singer and dancer/choreographer. I would like to perform more in the US and Europe over the next decade, as well as in India. I would like to get the new CD released in India, just as my previous ones were. 10 years from now I see myself touring around the world, working with great collaborators, and of course with Vineet. My life will always be the same in the sense that I’ll be doing the same things as what I’m doing now, but on a bigger scale.