“EVERYTHING was GOOD-BYE
” by Gurjinder Basran is a novel I had wanted to read for some time and finally did.

This is a story that takes a lot of courage to read as it captures the struggles that Indo-Canadians experience in a Western culture. Gurjinder uses the main character Meena, the youngest of six daughters raised by a widow, to portray the expectations of Indo-Canadian immigrant parents who hold on to traditional ideas, customs and traditions that tend to influence how they raise their children abroad.

I really enjoyed this novel as it touches on the immigrant experience, which involves settling in Canada and living in a traditional Indian household. It also examines gender differences in the South Asian culture; particularly how having daughters is not valued as highly as sons. Furthermore, the principles of the Sikh faith to some extent are addressed with an introduction into the temple and the first few line of the religious prayer that Meena recites, “Ik Onkar…”.

Additionally, the concepts of racism, discrimination and stereotypes in Canada are represented by Meena’s treatment in school by her peers and when, her Caucasian friend, Liam’s father mocks the pronunciation of her “Indian” name and tells his son to stick to his own kind. The novel also touches on relationships as Meena is not allowed to stay out late or talk to boys. Her mother reminds her that talking to white boys or dating is forbidden in the culture because marriages are to be arranged.

This concept of arranged marriages becomes more evident as suitable candidates are presented to Meena and the reader learns how her mother would have strongly opposed the idea of an inter-racial marriage since it would mean disowning the family, kind of like how her sister Harj did for different reasons. Instead Meena is reminded of how elders and in-laws should be respected as her duty, as a female, is to preserve the Indian heritage through her dress (wearing saris), ability to learn to cook, speak Punjabi and bearing children as her mother-in-law expects a grandchild.

Meena just wants to avoid the Indian culture and follow the Canadian cultural norms. For her it is all about seeking happiness in life by pursing her own aspirations and dreams regardless of what the Indian culture says is acceptable. The author, Gurjinder also makes a point to touch on education and the professions that the South Asian community encourages daughters to pursue, a lawyer or a doctor, nothing of what Meena was. She was a writer and would journal, a career her mother could not seem to understand or explain to others in the community, but one that Liam as an outsider to the culture encourages her to chase.

I also felt that this idea of the caste system needed to be discussed further. I wish Gurjinder would have used the Sikh religious beliefs to touch on caste system, rather than simply mentioning how it refers to one’s wealth, level of education or occupation even in Canada. The Sikh religion abolished the caste system, but some people even in Canadian society still continue to, as Meena’s family does in the novel, place emphasize on this when finding potential partners for their children.

The term caste is used to refer to Meena and Sunny’s education level, for example, degrees that allow them to have careers. I was curious to hear more about the author’s perspective and how she would challenge others about caste system and its place in today’s society. Thus, I feel Gurjinder could have written a bit more on this subject to challenge the reader and herself a bit further in her writing process as she does depict in the novel that wealth cannot buy happiness or love.

Throughout the novel, Meena fights back with her own idea of culture and identity as an Indo-Canadian. Meena disobeys, does not accept her position or role in the family and larger community as it should be. She comes across as a confident young woman to the reader, as she speaks her mind for independence which challenges her family and community’s belief system. Meena is in an endless struggle to find happiness in all of her relationships (e.g. with her husband, friends, in-laws, sisters and mother) and is seeking freedom as she has numerous arguments with those around her, for example, her mother and husband.

She wants only what is best for her, but somehow gives in to accept an arranged marriage which requires her to forget happiness as she is to accept the challenges that come with her marriage to a spoiled and successful wealthy lawyer, Sunny. Sadly, Meena endures a lot of physical and emotional abuse from her husband Sunny which she finally manages to escape and this is when I thought she would be safe, but I was wrong. Suddenly the story twists as Meena enters into motherhood and begins to discover herself.

The mother-daughter relationship remains throughout the novel as Meena challenges her mother throughout and then finds herself in that same position of raising a child, but also wanting to speak to her own mother out of comfort. This is when Meena also reconnects with her first friend and love, Liam. Unfortunately, this novel does not end on a happy note which makes the reader feel Meena’s pain and suffering as she accepts the reality put before her. Meena continuously is searching for love, friendship and happiness, but instead of personal gains she keeps receiving painful losses. Meena is constantly let down as the doors close in on her even when she opens her heart to others. 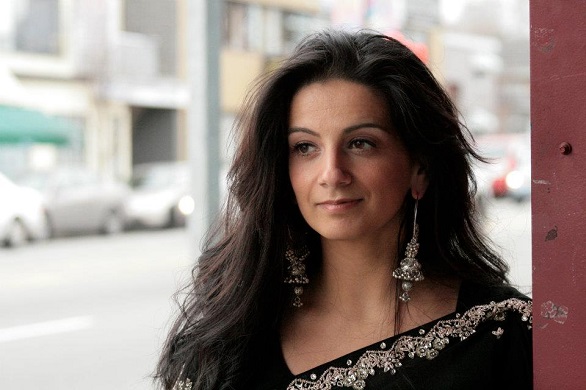 The author Gurjinder, a South Asian woman herself, has succeeded in producing her first novel and her writing is remarkable as she highlights the expectations that are placed on Indo-Canadians in society, by reminding us of Meena’s actions as a woman in society and what others in her community will think. I also respect the author’s position in bringing forward sensitive topics that are silenced in the South Asian community, such as consuming alcohol and domestic violence in Meena’s relationship, but also her sister Serena who is sent back home by her mother to an abusive husband.

Additionally, Meena and Liam’s own inter-racial relationships gives a picture of how we should discuss these issues of race more openly. This is a novel that will connect with many who are suffering behind closed doors with abuse and the family pressures to return to the perpetrators. Perhaps this novel can act as a guide for young female South Asian women, who may relate to Meena, as they may rebel with ideas of inter-racial dating or going against forced marriages and perhaps be struggling with their own ethnic identity as Indo-Canadians in different ways than Meena.

There were also times where I would have recommended that this novel be named “Black and White.” Especially since Sunny hates bright colors which he excludes from his wardrobe and Meena reminds him that the world is not “black and white” except his life. “He believed in a choice of opposites: yes and no, right and wrong, love and hate. There was no in-between for him.” Thus, the author uses passages similar to this one to remind the reader of how difficult it can be to make the right choices in life especially when you want to follow your heart and not what your mind or others are telling you to do.

However, as I continued to read I understood why “good-bye” was a part of the title as it depicted the heartbreaking story around Meena’s life and letting go of many relationships overtime, beginning with her own father’s death that the reader learns about early on. I felt hopeless as I neared the end of the novel and I wanted to jump into the novel to tell Meena that everything would be alright as I remained optimistic as a reader that it would be. In the end, “EVERYTHING was GOOD-BYE”, it leaves me wondering if and how Meena ever forgave.

I also struggled saying good-bye to Meena as I put down the novel and I am left thinking about how her life was after. Thus, I would strongly encourage Gurjinder to continue the novel from where it ends with a second part that circles the life of Meena’s daughter of mixed race, who is also raised without a father figure. These ideas of identity, culture, race, gender, or class could be explored further in-depth to challenge the readers own perspective.

To purchase a copy of the book please click HERE.