The maestro's daughter Anoushka, who too was nominated in the same category for her album “Traveller” accepted the Grammy on behalf of her late father at the Grammy awards show here Sunday.

“It's OK to lose to your father,” said the 31-year-old, who is also a sitar player and composer, as she received the award for her father.

Ravi Shankar died in December at the age of 92, after heart surgery at a hospital in La Jolla, California, near San Diego.

Earlier Saturday, Anoushka Shankar and the musician's other daughter, singer Norah Jones accepted the posthumous Grammy Award at a special ceremony in Los Angeles ahead of Sunday's Grammys show.

The Indian icon was among seven artistes, including Carole King and the Temptations, named as Lifetime Achievement award honourees.

Jones, who has won nine Grammys of her own, said of her father: “We know he was very excited to be receiving this award. We really miss him. He lived and breathed music.” 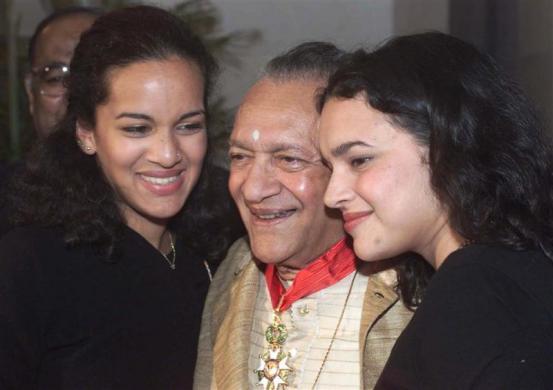 Ravi with daughters Anoushka and Norah.

“I remember him drumming on the breakfast table, trying to get me to learn to play seven (beats) over five. I'm still trying to learn that. We are very happy to accept the award for him.”

Although her mother, Sukanya, was in attendance at Saturday's event, she did not take the stage.

“She's the reason he was able to be alive as long as he was, so I'm eternally grateful to her,” Anoushka said of her mother.

Click below to see Ravi Shankar perform with his daughter, Anoushka: