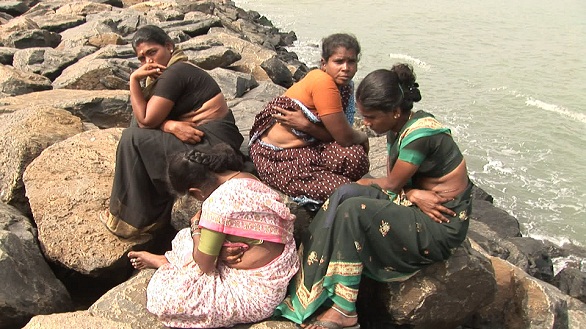 Every 3 days a Canadian dies waiting for a new kidney; in the US it’s a person a day. Where do patients go to fill the gap?

Filmmaker Rama Rau’s revealing documentary “The Market” follows individual stories that explore the larger issues surrounding the organ trade – and looks at these issues from both a Western point of view as well as from the point of view of people selling their organs. What are the ethics of organ buying and selling? And, what would we ourselves do if we were forced into a similar dilemma?

In a slum in Chennai, India most of the fishermen are in post-trauma conditions, having witnessed or been in the wake of the 2004 Indian Ocean tsunami. They simply refuse to go back to the sea for their livelihood, and to survive, their wives have taken to selling their kidneys to feed the children. The tsunami has accelerated what is becoming an accepted form of collateral – the kidney.

The global trade in human organs has become one of the world’s most profitable and dangerous enterprises; a black market that has become as large as the drug and human trafficking trade.

Hema, a young mother of two, wants to sell her kidney so she can pay off the crippling debts of her family. A broker tells Hema she'll get $2500 for her kidney. If she sells she will be the fifth member of her family to sell a kidney for an amount that represents several years' wages.

In Canada, Sandra’s kidneys are failing and her blood type is not compatible with her mother or daughter, ruling them out as donors. Sandra has been waiting for a new kidney for over 5 years and the disease has, at age 40, put her life on hold. Her mother, Christina, can’t bear the thought of losing her daughter and Sandra’s teenage daughter Kylie is putting on a brave face.

Two different people. Two journeys. With one end. To find a kidney, someone has to lose one….

“The Market” makes its Canadian Broadcast Premiere on:

“Twelve years ago, when I was still living in India, I had maids who had scars. When they used to casually tell us they had sold their kidneys, I did not see it as a symptom of a larger evil. Now, I have become a documentary and drama filmmaker and when I think back on those scars that I did nothing about, it’s a simple thing to answer, when people ask me how I managed to stay motivated, to make this film through two long years of research and three years of production – I did it for the women.” – Rama Rau.

Rama Rau is a writer-director who trained in films on one of the largest film sets in Mumbai, India. Now based in Toronto, Canada, her passion is to make films that are crosscultural and examine “the extraordinariness of ordinary lives”. Rama's films include The Market (2010), A Day in the Life of Vij's (2009), and Losing My Religion (2008 – Reel World Film Festival, Toronto). Rama has won the Tom Shoebridge Screenwriting Award, received the 'Filmmaker of the Year' award by the Toronto Business Forum and has been named a Quebecor Fellow of DOC, Toronto. She is an alumnus of the Doc Lab at Hot Docs (2007) and received Documentary’s Don Haig Award at Hot Docs 2011.

Written and directed by Rama Rau, “The Market” is produced by Ed Barreveld for Storyline Entertainment. Lisa Valencia-Svensson is Associate Producer.