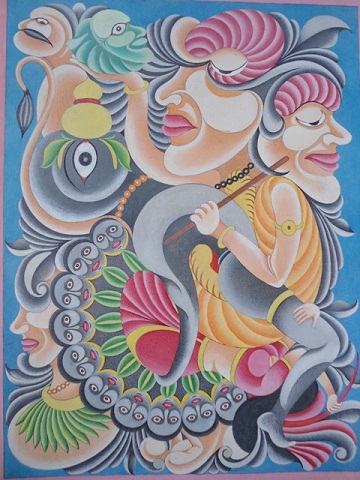 The exhibit consists of twenty five mixed-media paintings, a majority of which are water colour and poster paint on cardstock. The pieces chosen span the beginning of his career to the present. Each painting is painstakingly rendered in the South Asian miniature style.

Born in Rajasthan, India, Bajrang found himself striving against limitations after suffering physical injury at the age of eighteen, rendering him paraplegic from neck below. Challenged to reconsider every facet of his life, from his identity to his physical capabilities, Bajrang commenced an exploration of the ways in which he could continue to engage the world and express himself within it. With remaining mobility in two fingers on his left hand, he evolved a skill for painting, finding new means to roam and experience the world imaginatively. One piece often takes two to three weeks to complete. Discovered and supported by the Jaipur Virasat Foundation (original founders of the Jaipur Literature Festival), his exhibitions have traveled to Chennai and Jaipur.

Unfettered by formal training he deranges conventions, creating works of intriguing contradictions. Particular and peculiar in his stylization, he makes iconic South Asian themes intimate. By evoking the traditional, mythological and ethereal in Indian history, he transfigures the familiar and the archaic with his striking interplay of modern Indian popular cultural forms in whimsical rickshaw colours. Bajrang employs deities as vehicles to illustrate apparent political and societal contradictions. It's a startling disorientation as the revered, classical and otherworldly ancient are sent akimbo by his modern, wild ideas of the grotesque, the beautiful, and the mundane. A spirited contemplation of what was, is and can be, for both a man and a culture, is what spurs an invigorating confusion throughout his works. In the end, Bajrang’s brightly vivid and extremely detailed paintings touch on sarcasm, contradiction, and always, a deep sense of longing.

The exhibition opens January 26th and runs until March 4th, 2012.