Having previously appeared at The Royal Conservatory with her father, Ravi Shankar, during Koerner Hall’s Grand Opening Festival, in this performance Anoushka Shankar performs newly-written songs from her latest CD, Traces of You. 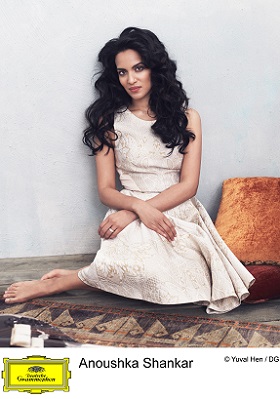 Inspired by the idea that everything in the universe leaves an indelible mark, or a subtle “trace” on everything else it comes into contact with, Anoushka draws inspiration from her relationships and multicultural lifestyle to trace a journey of love, change and loss. Having lost her father during the process of making this album, it was inevitable that her loss became the main focus of the songwriting.

However, the music is ultimately hopeful rather than mournful, as whilst losing her father Anoushka was also occupied with raising her young son.

Three forms of love: love for her father, love for her husband, and love for her son, proved to be the ultimate inspiration for some of the deepest music Anoushka has yet written.

Anoushka’s interest in multi-genre and modern forms of music is illustrated by her previous Grammy-nominated albums Rise and Traveller. However, the ancient Indian classical form she was handed down from her father Ravi Shankar is always the central current running through her work.

On Traces of You, she enlisted the help of her dear friend, the wonderful musician-composer Nitin Sawhney, as producer. His first question to her was “Who is Anoushka, and how do we express that musically?”

The work that followed resulted in the most congruent synthesis of styles Anoushka has yet achieved, brilliantly showcasing her classical Indian roots and sitar-playing skills whilst bringing to the forefront her composition and songwriting talents, in a way that dissolves the barriers between them.