Presented by Rowenta Beauty in association with Johnnie Walker, the event was hosted in honour of the release of ANOKHI magazine’s 10th anniversary collector’s edition, and comprised of a celebrity red carpet reception, ‘Prestige Awards’ show and VIP after party with food and cake to celebrate.

A spectacular fashion runway show, presented by Johnnie Walker, by designers to the stars, Falguni & Shane Peacock, had the audience in awe with a collection of futuristic centric ensembles.

This was the designer duo’s first showcase in Canada.  Live musical performances included Prita Chhabra, FenSTAR, Anjulie, Anusha who launched her world premier music video for ‘Not Tonight’ during her performance and JoSH closed out the show with an innovative musical medley which included an array of acoustic guitars and choir.

The highlight of the show was a surprise interview with Priyanka Chopra, hosted by Raj Girn, which centered around her foray into the music business, ending in audience participation where Priyanka answered questions posed by her fans.

Along with Priyanka, many notable personalities from the South Asian global community were honoured as part of ANOKHI’s ‘Prestige’ campaign honouring ‘global-game changers’ which comprised inclusion in the magazine’s ‘Prestige List’ and presentation of ‘Prestige Awards’ throughout the show, in the categories of media, business entrepreneurship, music, film and fashion. A special achievement award was also presented to Priyanka for her contribution as a ‘serial global game-changer’. 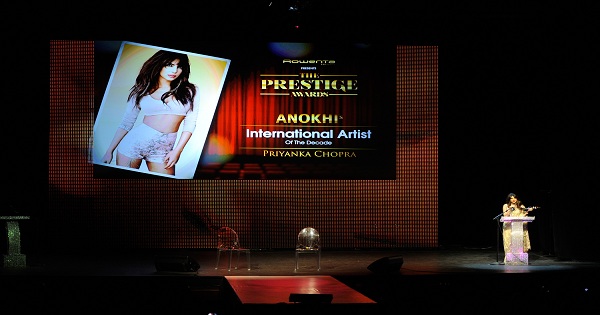